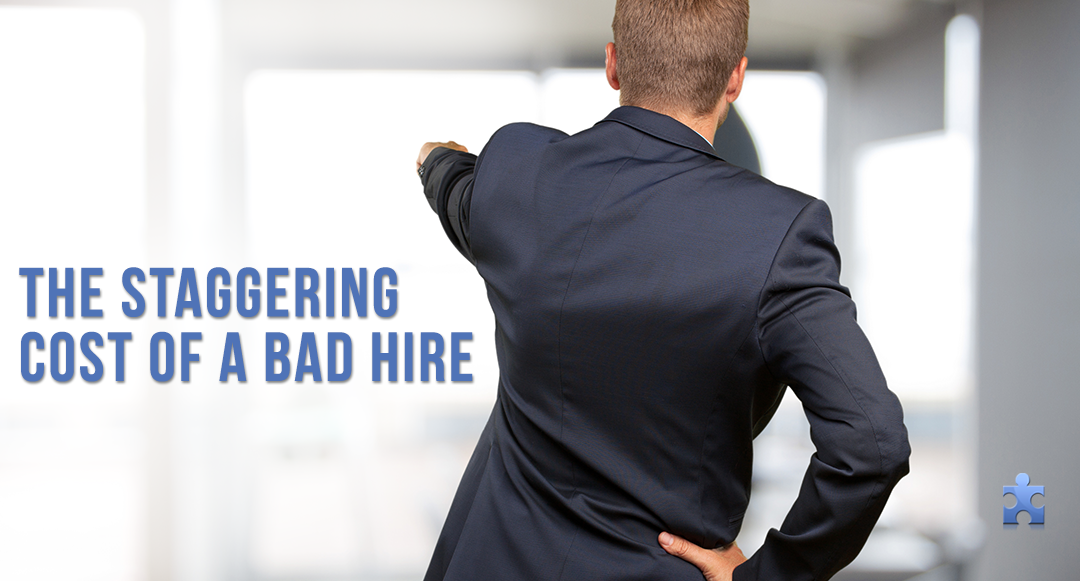 Poor hire costs you more than time and energy – they disrupt business in multiple ways. And the effects can be more adverse for small and medium-sized businesses.

It is for this reason that companies invest a lot of time assessing job applications. The cost of selecting the wrong person can run into the hundreds of thousands or even millions in terms of monetary loss, not to mention the potential negative impact on a company’s morale and productivity.

The Costs of Bad Hires Are High

It is reported that 80% of employee turnover is due to bad hiring decisions (HBR, 2015). And this is costly.

Expenses associated with hiring include interview expenses such as travel, hotel, and meals, training, and orientation, employment testing, termination costs such as Cobra, unemployment and potential litigation expenses should the candidate decide to sue you for wrongful dismissal, plus relocation costs and outplacement or career transition costs.

But mostly it’s because you need to repeat the entire hiring process to replace the wrong hire, which includes time and expenses.

And, ‘one bad hire can lead to a domino effect of more bad hires and decisions costing a company millions’, says Zappos CEO Tony Hsieh. He estimates his own bad hires have cost Zappos “well over $100 million.”

Of course, there are also costs that are difficult to quantify. A study by Robert Half Inc., a global staffing firm, as cited by the Society for Human Resource Management reveals that the majority of chief financial officers (CFOs) surveyed were most concerned about degraded staff morale (39 percent) and a drop in productivity (34 percent). Monetary costs came in third (25 percent).

“A bad hiring decision can often cause a negative ripple effect through the organization,” said Greg Scileppi, president of international staffing operations at Robert Half, as reported by the SHRM.

“Hiring a bad fit or someone who lacks the skills needed to perform well has the potential to leave good employees with the burden of damage control, whether it be extra work or redoing work that wasn’t completed correctly the first time,” he said. “The added pressure on top performers could put employers at risk of losing them, too.”

If we are to find out the solution to mitigating the costs of “bad hires”, the important question we must answer is why companies make bad hires.

There are a number of reasons why most companies make bad hires. For one, recruitment is not an exact science. “The process used in finding and selecting people is an inexact science at best,” said Ronald C. Pilenzo, SPHR, president & CEO of The Global HR Consultancy, based in Hobe Sound, Fla. We still do not have a foolproof system of selecting people for jobs, added Pilenzo, also the former president of the Society for Human Resource Management. “We have tried and still use a variety of methods ranging from an interview alone, interviews preceded by tests, reference checks, psychological assessments and more. The bottom line is that in the end after all screening methods have been considered or applied, an individual judgment must be exercised on one finalist for each job.”

Much has been said about the issue at hand. So, in a nutshell, we will enumerate a few reasons why it is difficult to avoid bad hires.

“The job definition and the criteria for the job are different,” says Gamble. “And often if you went to the people who actually perform the job, you’ll hear an entirely different description of what it takes to perform the necessary tasks than what’s posted in the job definition. That’s why it’s important to involve those who are actually doing the job in writing the description,” adds Gamble. “That way you avoid any miscommunication about what’s required to do a successful job.

This can occur when a candidate, who seemed perfect on nearly every level, clashes with the organization’s culture. This is referred to as “cultural misfit”. This stems from the hiring manager’s’ inability to probe into the candidate for cultural fit. This brings us to the next issue:

3. Lack of a standard interview process

A study by the Society for Human Resources Management (SHRM) reveals that companies lacking a standard interview process are five times as likely to make a bad hire. SHRM’s researchers also found out that hiring managers make mistakes by asking the wrong questions, don’t articulate the company culture (thus the misfit afterward) or the job requirements, and don’t even evaluate the interview.

What Does It Take To Avoid Bad Hires

“Companies can’t afford hiring mistakes, which are costly and can erode staff morale,” said Max Messmer, chairman, and CEO of Robert Half International and author of the Human Resources Kit For Dummies. “Finding the right match requires time and attention, and it’s something even busy managers need to make time for.” So, how can companies improve the quality of their hires?

Researchers of SHRM found that companies with a strong onboarding process improve new hire retention by 82% and reported a more than 70% increase in productivity. “Onboarding should not be viewed as a one-week orientation but rather a year-long program that helps new hires feel acclimated and motivated to perform,” the study states.

Branding also helps in improving the quality of hires. The same study from SHRM found out that making an investment in branding increases the likelihood of making better hires threefold. When we talk about branding, we refer to the overall packaging of a company (e.g. communication and public image and reputation among others).

Lastly, working with a recruiter can greatly help companies improve the quality of hires. Recruiters in specialized fields (i.e. I.T., engineering, and health profession among others) can help hiring managers identify job candidates with the appropriate skills. Recruiting takes time and uses up a lot of resources. In working with a recruiter, companies can allot their time on other tasks and let recruiters do what they do best.

A survey revealed that managers waste a lot of time managing poor performers, and much more time when they end up replacing them.

According to Robert Half Inc., ‘in many cases, recruiting agencies have worked with a candidate on a temporary or consultative basis before, giving staffing specialists a good idea whether the potential employee will be able to perform to your standards and mesh with the office culture.’

Here are some other suggestions from Robert Half Inc.:

Note on the methodology of the CareerBuilder Survey:

The survey was conducted online within the U.S. by Harris Poll on behalf of CareerBuilder among 2,379 hiring and human resource managers ages 18 and over (employed full-time, not self-employed, non-government) between August 11 and September 7, 2016. Percentages for some questions are based on a subset, based on their responses to certain questions. With a pure probability sample of 2,379, one could say with a 95 percent probability that the overall results have a sampling error of +/- 2.01 percentage points. Sampling error for data from sub-samples is higher and varies.